It’s over a year since the Peace Arch was demolished accidentally by a truck. When is it going to be replaced? Why is it taking so long? 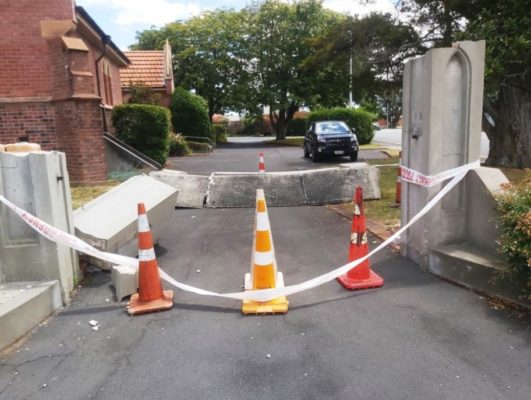 The Story So Far

The arch was demolished just before Christmas 2020 and, whilst there is little visible sign of activity, a lot of time and work has gone into the process of replacing it.

Immediately after the Christmas break, with agreement from the Insurance company’s assessors, a heritage architect and a structural engineer were engaged to prepare drawings, calculations, specifications and contracts ready to seek prices from contractors and to seek the necessary council permits.

When the first indicative costs from the contractors and consultants to rebuild the arch were received the insurance assessors rejected them. Some of the costs we had paid to date were also disputed. The arch is covered under the church building insurance policy which is a “commercial” policy rather than a “domestic” one, thus the focus is on the insurer making a cash payment, rather than facilitating the full restoration of what existed before the event.

Thus a long, drawn-out negotiation then took place to try to ensure the church was not left liable for some of the costs. After considerable to-ing and fro-ing, “independent specialist” reports and several meetings an agreement was finally reached in November.

The final plans were produced and agreed – these see the arch moved back a couple of metres from its present location, linked back to the planter with concrete seats. This will allow the development of a garden for reflection and also improves safety by improving Queen St driver visibility when approaching the roundabout.

The work plan was immediately restarted and a couple of weeks later applications were able to be lodged with Auckland Council for building consent – and, because of the relocation, also for resource consent. These approvals have both now been granted and so we move to the actual rebuild.

Two separate skill sets are needed to carry out the rebuild.

Firstly, a contract is being agreed with a local building contractor with the skills to create the new steel-reinforced concrete “core” of the arch. This involves new foundations as well as the actual arch and also the adjoining seats.

Secondly, when the core is completed, a specialist contractor is needed with the required level of skills to plaster the core, create the shapes and then add the extensive detailing will take the project to completion.

The first step will start soon, once the contractor completes their current work. We hope material shortages will not affect progress.

For the second step there are very few specialists in New Zealand with the proven level of skills needed to complete such work to heritage standard, in external concrete. We are working to engage a highly respected Auckland company that has such a staff member, but until they are able to confirm his availability, they will not sign a contract. The staff member is from overseas and is trying to arrange a visit to his home but with travel disruptions timing is yet to be confirmed. We hope to be able to proceed smoothly but are looking at alternatives although they appear to be rare.

Thus, there is a possibility of a period with the old arch completely removed, the new arch core in place, but unfinished for a period.

With the continuing inflation of building costs, the available funds are very tight but until the work is completed, we will not know the true position. Donations are obviously welcome. If we end up with a surplus the funds will be put towards the upcoming heritage church building seismic-strengthening project.